Quito doesn’t like to boast. Sure, the city is a UNESCO World Heritage Site, and yes, it’s the world’s highest capital city (9,350 ft/2,850 m above sea level), but Quito is modest. It doesn’t flaunt its cobbled colonial streets, regal heritage hotels where you can take afternoon tea, or handsome churches; it simply displays them for you to enjoy. And here’s how to do so, during one fantastic long weekend.

From Mariscal Sucre International Airport, the drive to downtown Quito takes 45–80 minutes, depending on traffic. Exiting the airport, you’ll see a fixed-price taxi counter. Get a ride to the Centro Historico, which is compact and easy to navigate on foot. 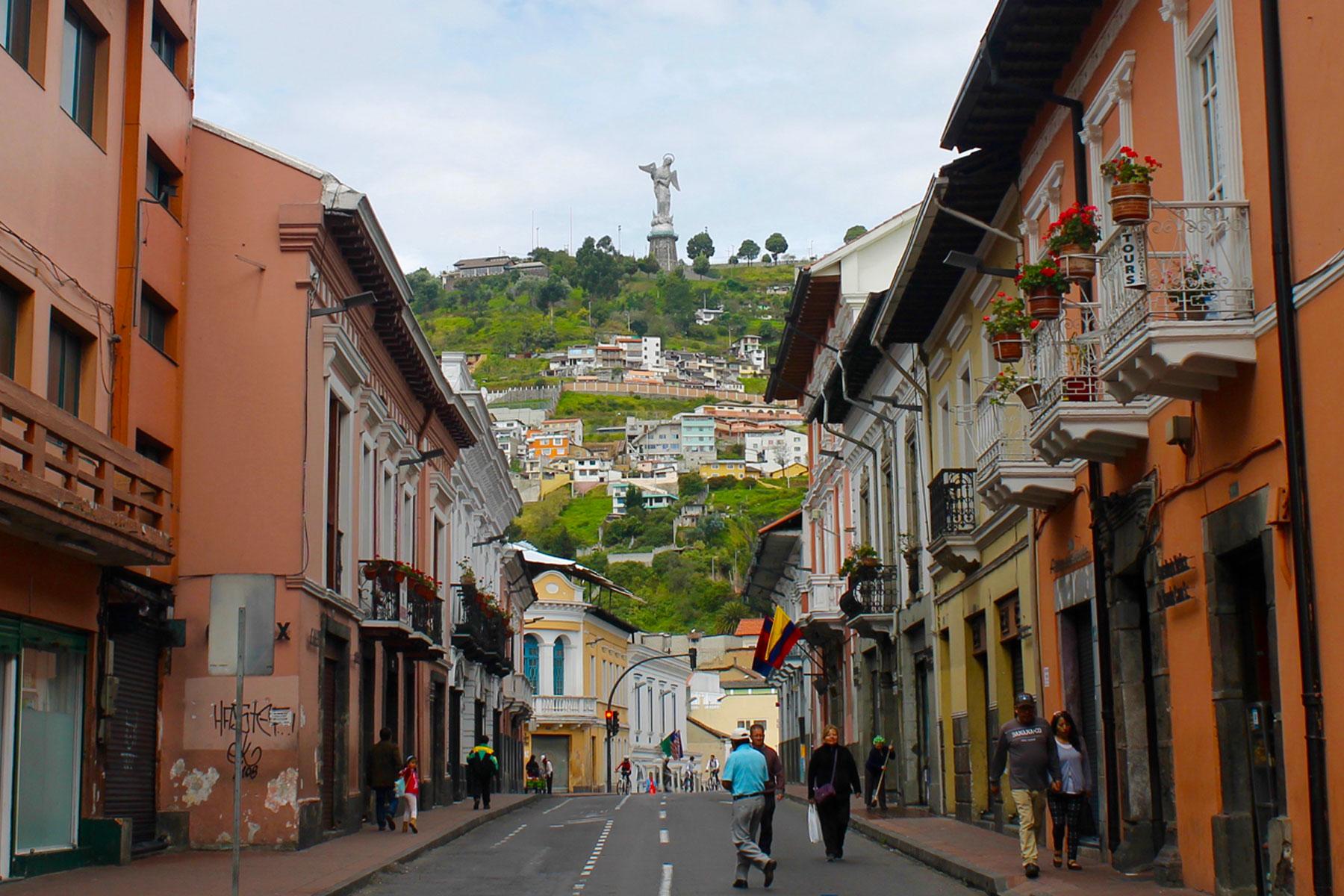 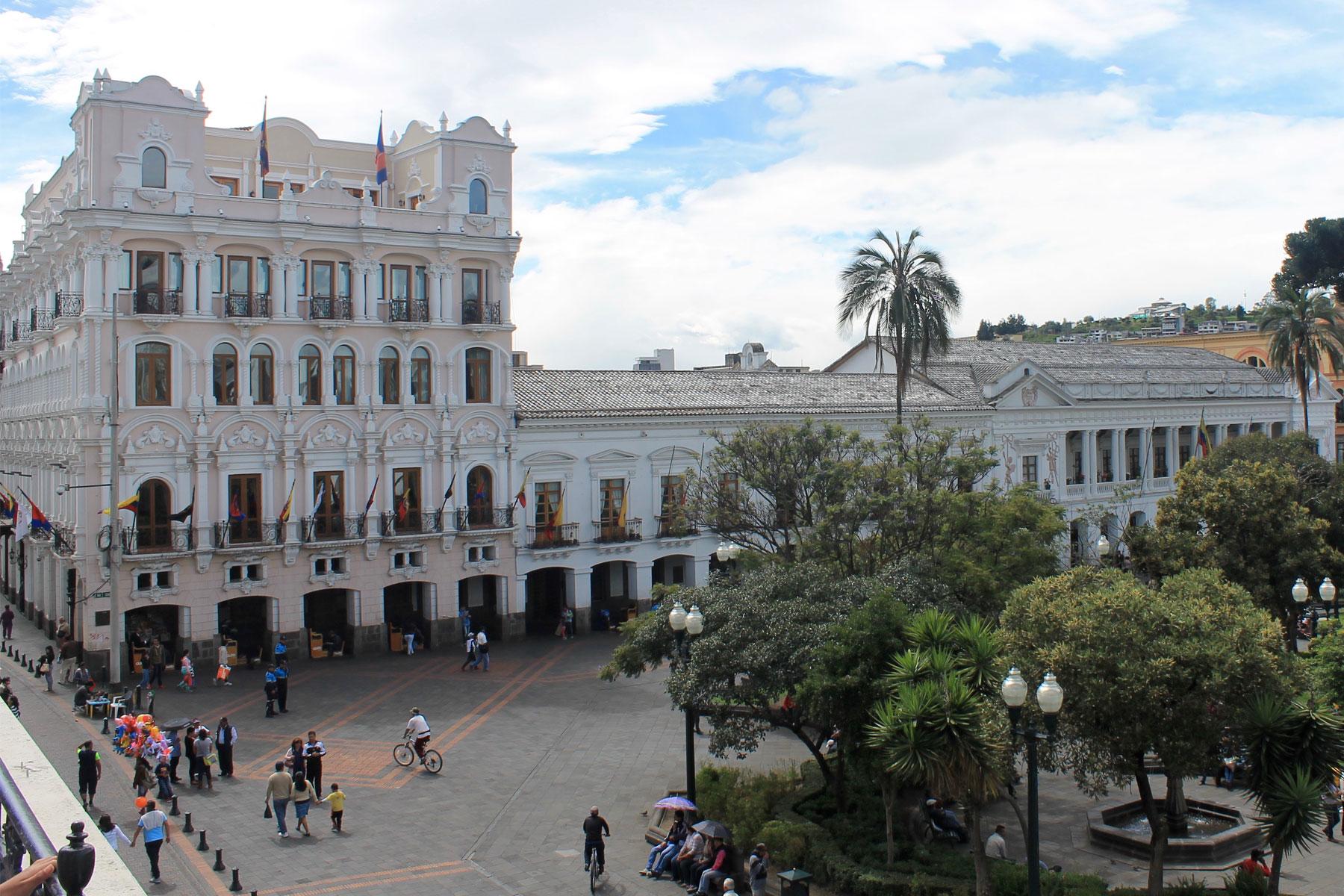 Drop your bags at the well-priced nine-room boutique Hotel Casa Gardenia and walk 10 minutes to lunch at Tianguez. Take an outdoor table on Plaza San Francisco so you can people-watch as you eat warming seco de chiva (goat stew) and zingy ceviche. Service is notoriously slow here, but there’s no rush; your next stop is just upstairs at Iglesia de San Francisco (Church of Saint Francis). Construction on the church, established by Franciscan monks, began in 1536 and continued over decades. Its white-on-dark stone exterior belies the splendid interior, absolutely dripping in gold. Its gilded altar could give Versailles a run for its money.

Quito can feel blustery year-round, so layering clothing is key.

From the church, walk one block to Casa del Alabadao, the museum of pre-Columbian art. A handsome 17th-century house is the setting for this small museum, whose eight galleries contain more than 500 pieces. Works are arranged thematically rather than chronologically, which makes the engaging free audio guide particularly useful. Take a seat in the tranquil courtyard and try to imagine the proud conquistadores who lived here nearly 400 years ago. If you’ve time, the gift shop makes a solid souvenir stop, its shelves full of local handicrafts.

You’ve now seen the old and the ancient, and now it’s time for the new. Walk 15 minutes to happy hour at Bandido Brewing. After sitting for a pint of crisp, spicy Honey Ginger Saison, made with local honey and fresh ginger, you can either walk 10 minutes back to your hotel for a break before dinner or go straight to Hasta La Vuelta. From a balcony table overlooking the interior courtyard, or inside the warm restaurant, tuck into hearty Ecuadorian fare—maduro con queso (fried sweet plantains with cheese), tender marinated chicken with yellow rice and fried plantains, and grilled shrimp, grilled simply with olive oil and lemon, and served with potatoes and salad.

After breakfast, take a taxi 25 minutes to Fundación Guayasamín and Capilla del Hombre in the residential Bellavista neighborhood. Ecuadorian contemporary artist Oswaldo Guayasamín (1919–99) lived and worked at this beautiful museum and workshop, though unfortunately, he died before the museum’s completion. On display are both Guayasamín’s work as well as his personal art collection, including pre-Columbian ceramics and metals and colonial religious artwork. Join a tour in English to get a better understanding of this dynamic artist. A few doors down from the museum at OMAMA Coffee, take a break with a hot drink and slice of homemade apple cake. 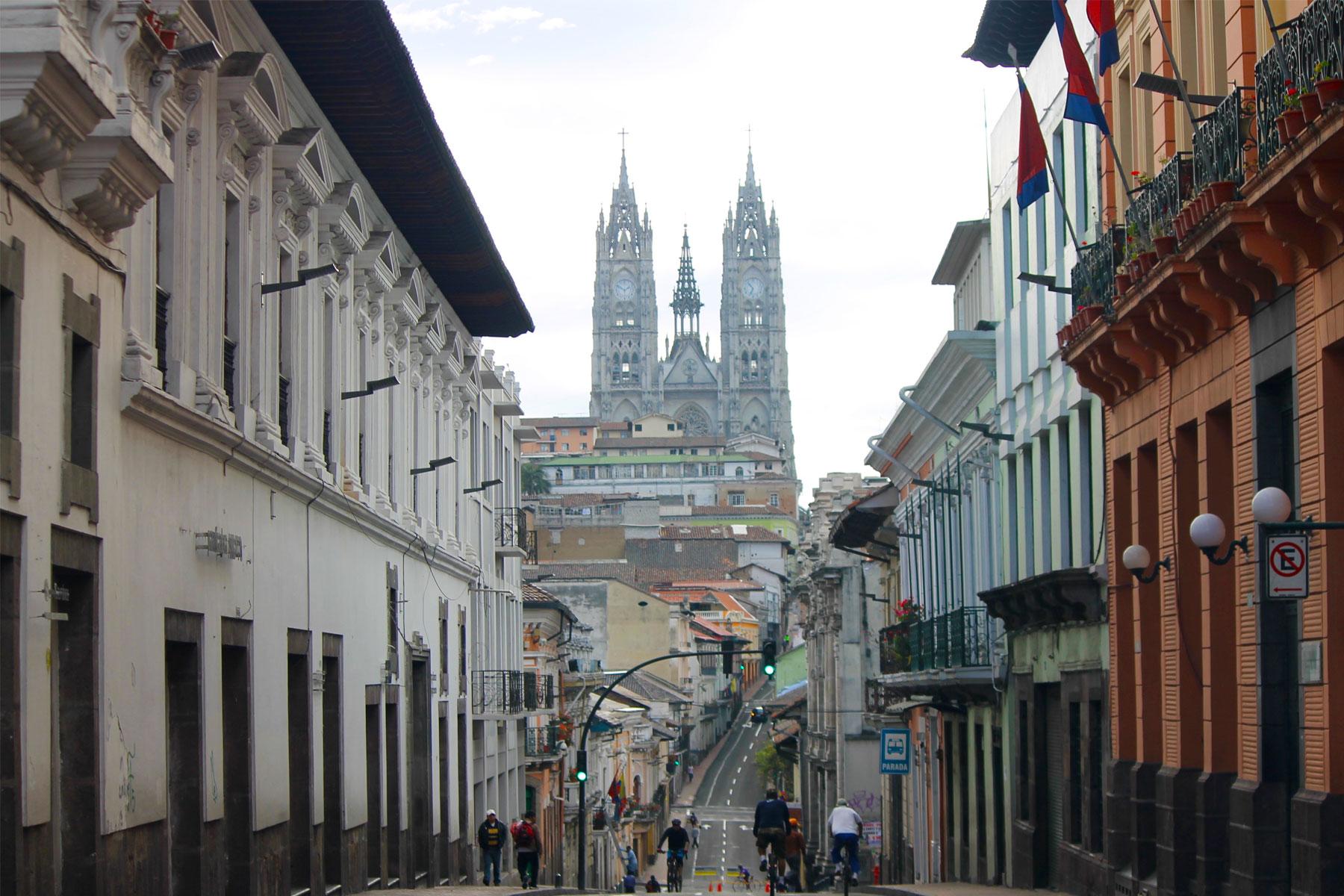 Your next stop is Guápulo, a well-preserved colonial village in a valley below the museum. Take a taxi from the museum (around 12 minutes), and once there, walk along the cobblestone lanes until you reach Santuario de Guápulo. This 17th-century church may not get top billing like Iglesia de San Francisco, but its sanctuary doubles as a gallery for paintings and sculptures by lauded artists of the Quito School. Note the side altar and pulpit, finished by Juan Bautista Menacho in 1716.

From here, take a taxi 25 minutes back to Centro Historico for lunch at Ecuadorian restaurant Casa Los Geranios. If it’s nice out, have lunch in the geranium-filled courtyard. A bowl of locro de papa (traditional potato soup), served here with a bit of cheese and topped with avocado, is warm and filling. The flaky sea bass, with quinoa and salad, is a welcome break from heavier meat-based dishes. The kitchen here turns out nice empanadas; filled with cheese, meat, or plantain and corn, they’re big enough to share.

It’s time to work off lunch with a climb up to El Panecillo. “The Little Bread Loaf,” as its name translates, is topped by 148-foot-tall (45 meter) statue of the Virgin of Quito, built over 20 years and finished in 1976. From up here, you can see Quito’s sprawl and its surrounding volcanoes. Though just over a mile (1.9 km) from the restaurant, this uphill walk will take around 35 minutes. You can also take a cab and have it wait for you at the top. 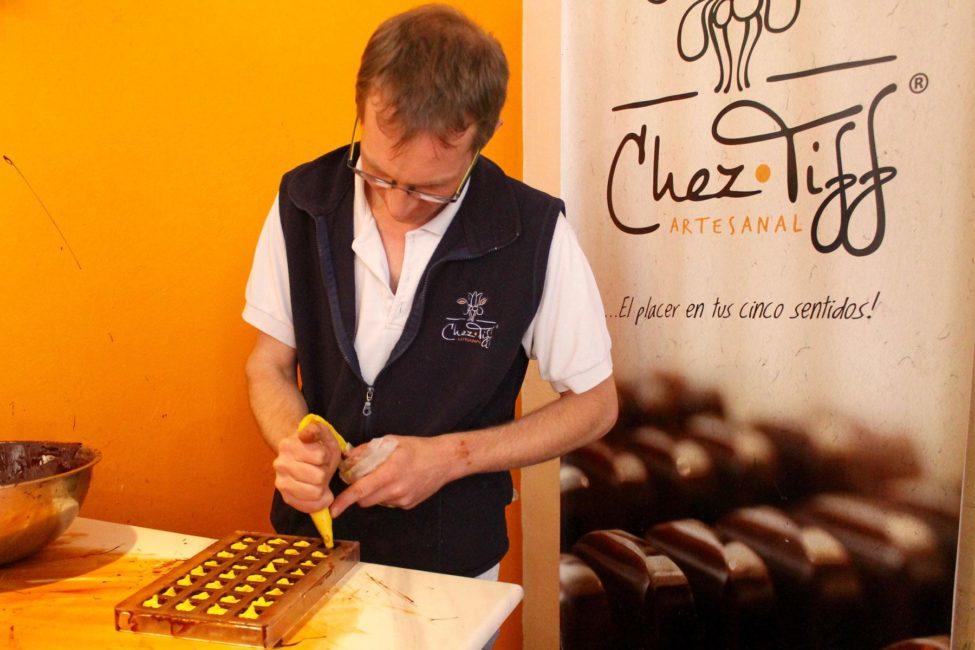 When you come down from El Panecillo, head toward Calle de la Ronda, an exemplary model of urban renewal. What was a once a derelict street has become two charming pedestrian-only blocks, the empty heritage buildings now housing shops, cafés, and a few bars and restaurants. Ecuador grows some of the world’s best cocoa beans, and at Swiss–Ecuadorian owned Chez Tiff, those beans are used to produce delicious bars and truffles. Stop in for a taste and a lesson, in English, on the bean-to-bar process, and then try to resist the siren call of passion fruit truffles. Farther along you’ll see arts and cultural center Casa de las Artes la Ronda and two artisan’s shops. At Humacatama, Luis Lopez makes all manner of hats in the technique he learned from his father and grandfather. In the same building is Hojalateria Silva, where Humberto Silva has his tin workshop. (Oe1-130 Calle de la Ronda across from Casa los Geranios)

Dinner tonight is at La Purísima inside Teatro Bolívar, a grand dame built in 1933 and designed by American architects Hoffman and Henon. This 2,200-seat theater was once the place for theater and cinema. Its design is eclectic, with elements of Art Deco and Moorish styles. In 1999, the theater was destroyed in a fire and since then has been under renovation, though it was able to reopen in early 2016. Whether you’re served a black bean empanada filled with tuna, grilled corn with cheese, or stewed rabbit with chorizo, dishes are beautifully plated with colorful microgreens and fresh flowers.

Start the day at the Basilica del Voto Nacional, a massive neo-Gothic church built in 1926. Instead of the gargoyles you’d expect, Ecuadorian jungle animals like turtles and iguanas sit on the sides of the church. Climb the steep stairs and three ladders (with handrails) to the top of the basilica’s 380-foot (115-meter) towers for a sweeping view of the city. 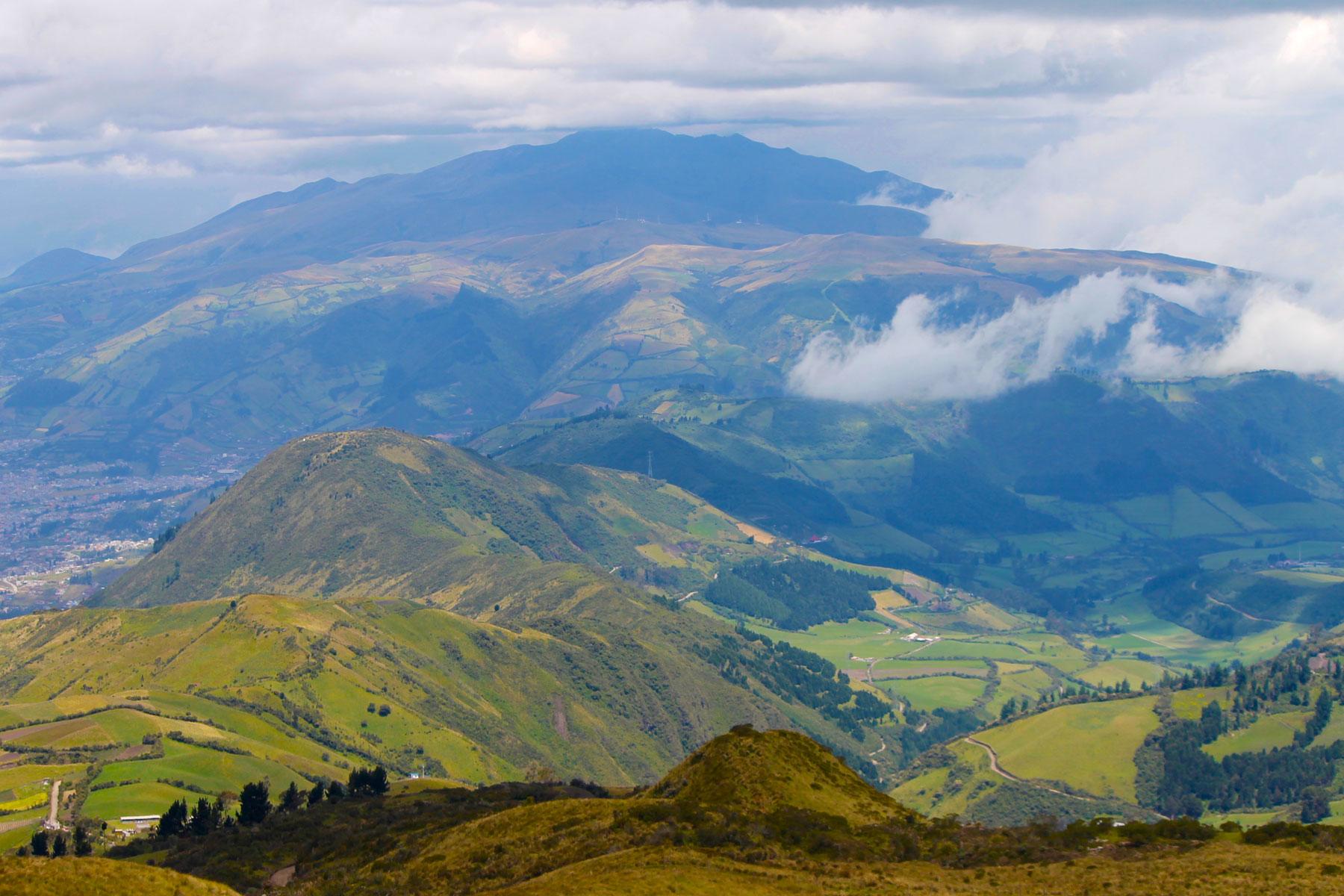 The selection here is dizzying—savory shrimp empanada or a slightly sweet cheese one? Octopus ceviche or crab? Ponder as you sip fresh juice—there are 16 tropical fruits from which to choose.

Next, meander half an hour to Parque El Ejido, stopping along the way at Parque La Alameda, where you can see an impressive monument to Simón Bolívar. On weekends, local artisans set up in Parque El Ejido, selling jewelry, paintings, textiles, and miscellaneous souvenirs. For lunch, walk 15 minutes up to La Mariscal neighborhood, where Achiote serves casual Ecuadorian food in a bright space, its wall of windows looking out onto a leafy residential street. The selection here is dizzying—savory shrimp empanada or a slightly sweet cheese one? Octopus ceviche or crab? Ponder as you sip fresh juice—there are 16 tropical fruits from which to choose. From here, take a taxi 20 minutes to the base of the Teleférico. This cable car whisks you from the foothills of Volcán Pichincha to its height (13,300 feet/4,050 meters), covering 3,620 feet (1,100 meters) in a cool 10 minutes. The view is stunning, with all of Quito spread out below you in one direction; from another, you’ll see rolling green hills and a few volcanoes. Volcán Pichincha’s summit is a further 700 feet (215 meters) up.

INSIDER TIPDon’t undertake this climb unless you are moderately fit, wearing proper shoes, and have already acclimated to the altitude. A jacket is essential up here, where even on a sunny day it can get windy and cold.

End the day by visiting two of Centro Historico’s house museums. From the Teleférico, take a taxi to Plaza Grande (Plaza de la Independencia) and then walk one block to Casa de Sucre. The museum is the former home of Venezuelan independence leader Antonio José de Sucre (who was also the second president of Bolivia), and his wife, Mariana Carcelén. Original 19th-century furniture, clothing, household items, photographs, and maps and documents fill the second floor. Around the corner is the excellent Museo Casa de María Augusta Urrutia, the former home of Quiteña philanthropist María Augusta Urrutía. The 19th-century home has many of its original furnishings—including exquisite dinnerware and Ecuadorian art spanning several centuries—lovely stained-glass windows, and a verdant courtyard.

For your last dinner in Quito, step into La Belle Epoque, Hotel Plaza Grande’s upscale Mediterranean restaurant. Ask for a window table so you can look out on the Presidential Palace and, atop El Panecillo, the Virgin of Quito, both lit up at night. The food is quite rich here—duck terrine, rack of lamb, panko-crusted lamb (there are a couple of vegetarian options, too)—but save room for dessert if you can. The house-made sorbets, in flavors like lavender, rose, lemongrass, and ginger are delicious.

Quito has a good range of accommodations, with independent boutique hotels—family-run guesthouses up to ultra-luxe—and familiar chains. You’ll find a cluster of boutique hotels in the Old Town (Centro Historico) and, in the New City, big hotels of familiar brands, along with a few comfortable boutique options.

If you’re traveling with children, as many Galapagos-goers are, you’re likely to be most comfortable staying in the New City. Though you’ll need to take a taxi to the Old Town where the hotels are big and full of amenities, and busy enough that children can make noise without being noticed. They’re generally large enough to accommodate an extra twin bed. Some, like J.W. Marriott, Swissôtel Quito, and Hilton Colón Quito even have pools. Mercure Hotel Alameda, though without a pool, is, like the Hilton, just 5 minutes’ walk from Parque El Ejido. On weekends and after school, the park is full of families, with groups of kids climbing on playground equipment and playing pick-up futbol (soccer). If you prefer the New City but also a boutique hotel and easy access to nightlife, book in at 13-room Hotel Casa Joaquin, on Plaza Foch in lively La Mariscal. 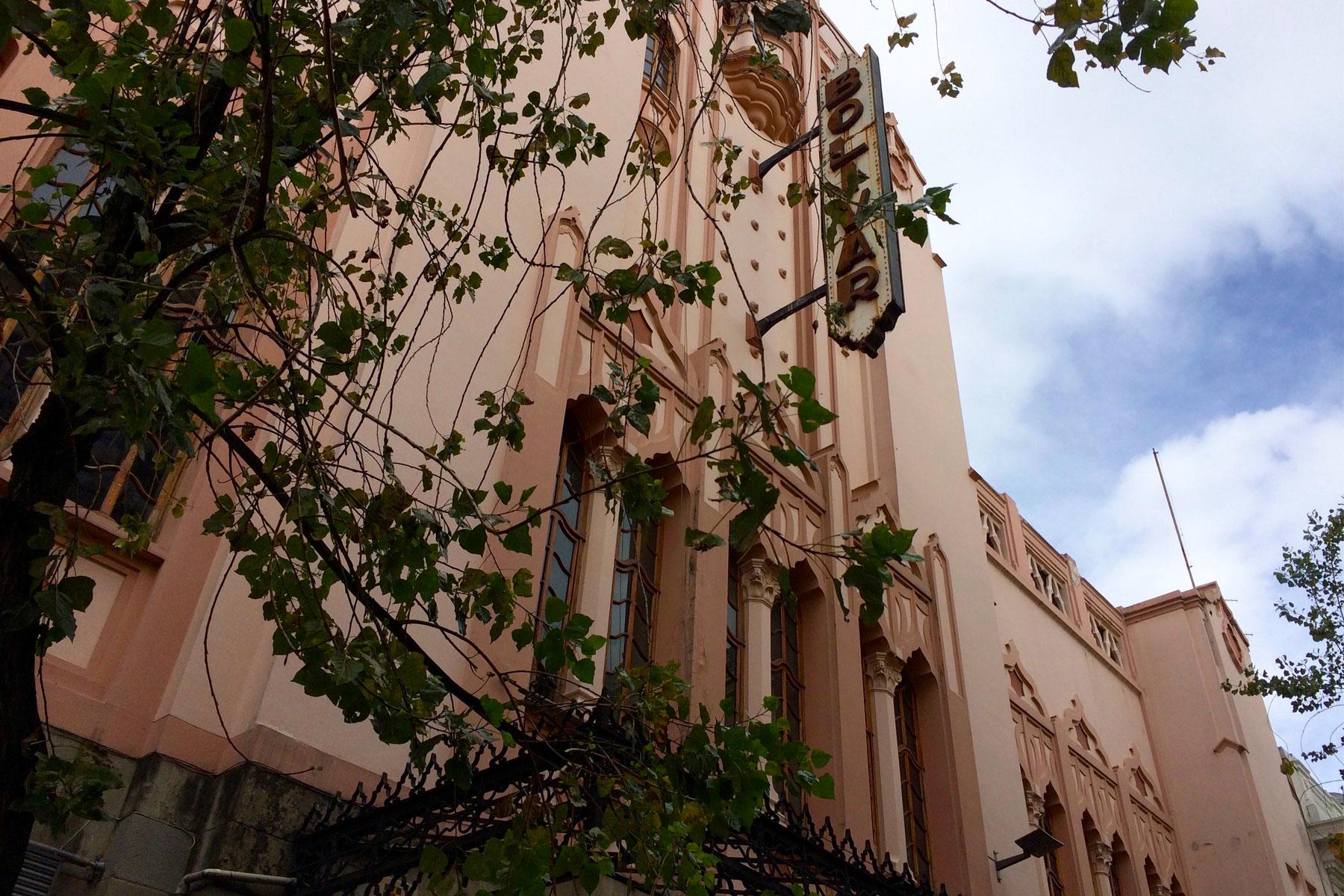 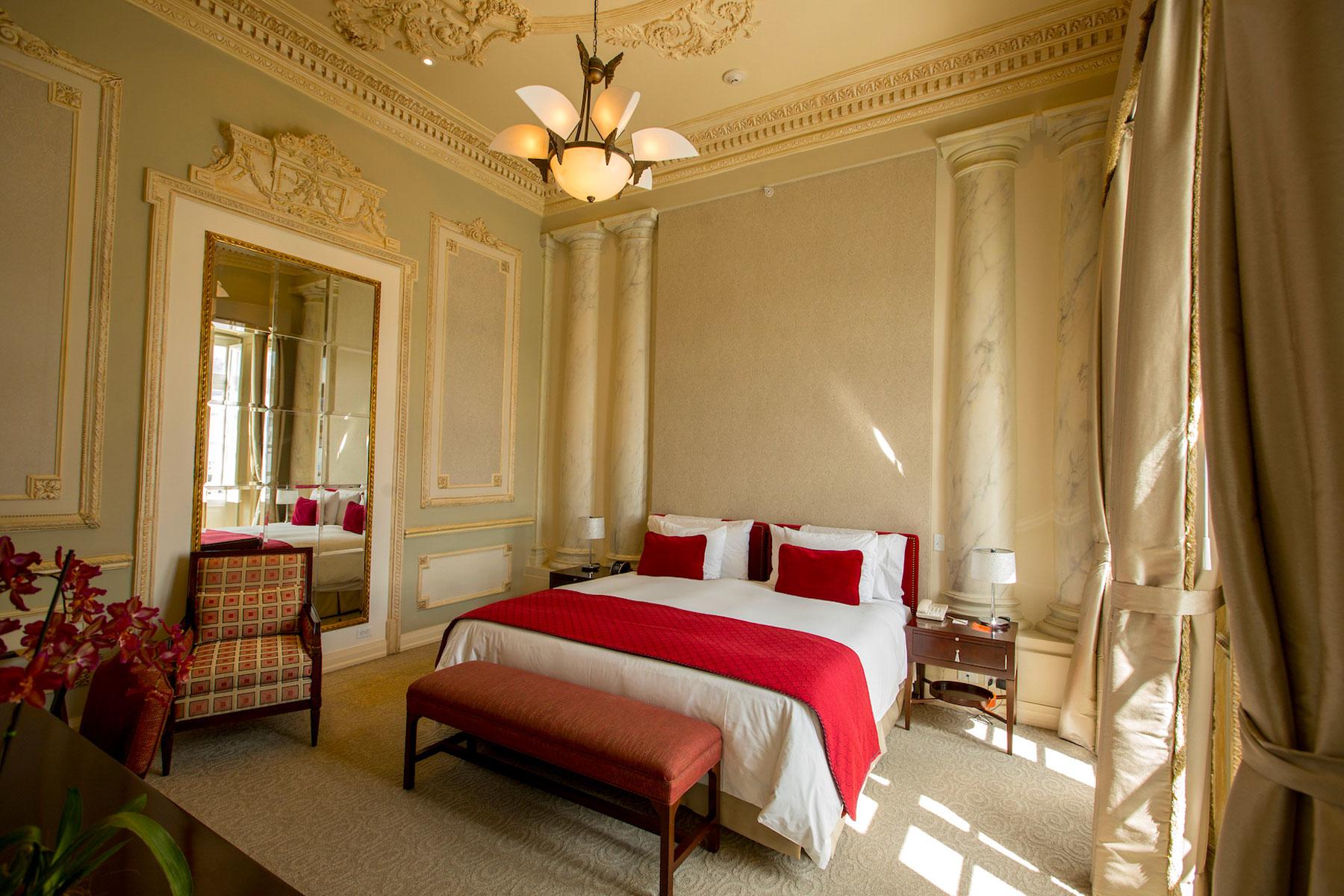 Although nearly on the equator, Quito’s altitude (9,350 ft/2,850m) keeps it relatively temperate. The best time to visit is June through September when days tend to be sunny and clear, with an average high of 67°F/19°C and a low of 49°F/9°C. Visit Quito in October and November and daytime high will likely be in the mid- to low 60s°F, with occasional afternoon showers. December to May is low season in Quito, coinciding with high season in the Galapagos (January–May); expect some rain daily, with daily highs in the mid- to low 60s°F. Quito can feel blustery year-round, so layering clothing is key.

#NotBadNews: This Is Our New Favorite Amusement Park

Where to Find the Best Food in Bangkok, According to Asia’s Best Chef

‘I Own 5 Bars and Employ 50 People. The Pandemic Has Been Brutal.’

Send To A Friend